Among the many strings on my bow, Reiki stands out as the most obvious that brought dramatic change to my life. When you are ‘attuned’ to Reiki and start to offer it to others you start to see how interconnected we all are and how profoundly we can affect each other. I often talk about Reiki in my Yoga classes, and I offer it as a shared group healing in some, too. It brings calmness and inner peace as well as benefitting the physical body. It’s a funny thing to explain if you haven’t experienced it, so I thought I’d share a recent client’s journey. This is her story (name changed):

A few months ago Pat shared with me that she had been to see her ex husband. She is in her 70s and they divorced many years ago, but he’d been on her mind. He was, sadly, very poorly, which she hadn’t been fully aware of, and didn’t know her. The following week, he passed away and Pat was both relieved (for seeing him) and devastated.

I saw a drastic change in her: she has been a regular Yoga client for the last couple of years and I like her very much. She’s bubbly, funny and open minded. An ex-nurse, she’s very compassionate about others and often puts their needs above her own. After the death of her ex, she became tearful at most sessions, was ore withdrawn and showed signs of high anxiety: picking at her hands and her clothes and losing the thread of her conversations half way through regularly. I was very concerned and spoke to her after a class. She told me she had loved this man very, very much and had waited 35 years for him to return to her, despite knowing he’d moved on, remarried and started a new life.

Getting things off her chest seemed to help, and I told her she could call me any time she fancied a chat, just to ensure she knew people were there for her at this trying time, if nothing else. Pat was very grateful, but then shared with me some alarming information: when her husband had left her all those years ago, she’d suffered a breakdown and experienced mental trauma. She’d heard voices encouraging her to ‘leave this life’ and was frightened to be left alone. These symptoms were resurfacing and she felt she was losing control. I urged her to go to the doctor and get medical advice.

Later that day, Pat rang me. She shared with me that she’d been to the doctors immediately, with a friend, and they had given her medication, advice and a counselling appointment had been scheduled. Relieved, I told her she’d done the right thing and thanked her for calling to tell me as I’d been very concerned. She then went on to say that she had asked the doctor if he knew of ‘Reiki’ and whether he thought it might help her. Quite rightly, the GP said it wouldn’t necessarily ‘fix’ things for her, but that anything that gave her a sense of ‘taking charge’ of the situation, that might relax her and help her general well being would be of benefit. He said he knew nothing about Reiki but if she felt compelled to give it a go, he would encourage her to try it. Pat asked me what my thoughts were and whether I felt it might help.

I’m well trained in Reiki and have a lot of varying experience in how it can make clients feel better, but I had never treated anyone with such extreme symptoms of trauma and so I was cautious in my response. I told her it was definitely to be thought of as a tool for relaxation first, especially given her circumstances, that it should never replace medical advice and treatment, but that I would be happy to work with her if she thought it felt right. She did and so we booked a course of four treatments, to begin the following week after her yoga class.

What transpired was one of the most beautiful Reiki stories I have to share with anyone interested in its benefits. Reiki has its own consciousness – bear with this if you’re sceptical! – and gives each person receiving it just as much as they need, in whichever way might help them the most. Think of it as a spring clean for all the layers of yourself. It will gently release anything not serving you – be that emotional, physical or spiritual. Pat’s first session was extremely gentle and peaceful – there was lots of mutual experience for the both of us: shared visions of warm light, pastel colours behind the eyes and a feeling of well being flooding through our bodies. Afterwards her face looked less etched with grief, she was more coherent and she visibly relaxed. She thanked me and said she would probably take a nap that afternoon.

The next week she was more like her usual self. She’d had her counselling session and booked another, praising the counsellor they’d assigned her for her warmth and understanding. They’d mutually agreed some mindfulness techniques for Pat to try when anxiety ‘hit’ again, and she felt happy that they tied I with the teachings she’d received in my yoga classes and as follow ups I’d supplied after the Reiki. We began our next session with Pat eager and excited to see what happened now. This second session the Reiki felt ‘deeper’. It seemed to travel mostly to her heart, where a lot of old grief was held, and I ‘saw’ it being released, like ribbons and bubbles. Her solar plexus, too, took a lot of the energy and there was a lot of blue light – symbolic of the throat chakra and being able to express ourselves. I sensed ‘someone’ was with us, a female vibe, and afterwards when I described it Pat said she thought it was probably her mother and that she, too sensed her around a lot at the moment. She shared some memories of her childhood and said she felt very much ‘at peace’ between the Reiki and other help she was receiving. Again, her face looked more relaxed and she said she was sleeping much better and the strange voices had disappeared.

The following two sessions we held followed a similar pattern: colours, lots of healing for her heart, throat and solar plexus but in the last session there was also a lot around her left hip. Hips signify our ability to move forward, to keep going – physically and emotionally. Pat said she’d had a bad left hip for some years and was surprised to find that an ‘added extra’ of the Reiki healing was that it now felt a little easier and less stiff each morning. In our last session she shared that she’d felt my hands on her hips all the way through, despite knowing I regularly moved my hands between different parts of her body and energy field.

All of this, for those of you who have experienced Reiki, and those who give it, will come as no real surprise. So far, so regular in Reiki terms, you might think! But, the real reason for this post and why I felt this was such an enlightening and powerful few sessions was this next fact: Pat shared with me two weeks into our course that she had suddenly felt the inclination to go on an online dating site. Like many people of her generation, Pat didn’t feel particularly adept at navigating the internet, but she trusted her instinct and persevered, finding a ‘silver surfers’ site that helped her create a profile, upload a picture and write to a few fellow users. Within a week of going on it she had ‘met’ someone who, like her, had suffered great loss and been alone for a long time. They mutually shared a love of various hobbies and interests and had the same goal in mind in utilising the site: to simply be themselves with someone they could call a friend and enjoy a little romance every now and then to ‘lighten’ their lives. 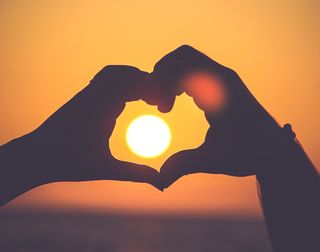 To say I was thrilled on receiving this, shyly delivered, information from Pat is an understatement! We discussed it at length and she says she feels very strongly that her counselling, new medication and support network have all helped her overcome what could have become a spiralling into despair that she might not have recovered from. But the hope, the self belief and the knowledge that she was ok, and would continue to be so for some time to come, that, she believes – as do I – came from her experience with Reiki.

Reiki can be sent ‘at distance’. I offer half an hour and one hour sessions like this. Contact me for more information.

Author: Yoga For All

Hi, I'm Jo. I left teaching in primary schools to follow my passion: teaching yoga and leading a more balanced, peaceful life! I believe Yoga really is for everybody! No matter what your age, physical ability or background there are simple ways to incorporate yogic principles into your hectic lifestyle and achieve more inner peace. View all posts by Yoga For All

Yoga for all – Northampton